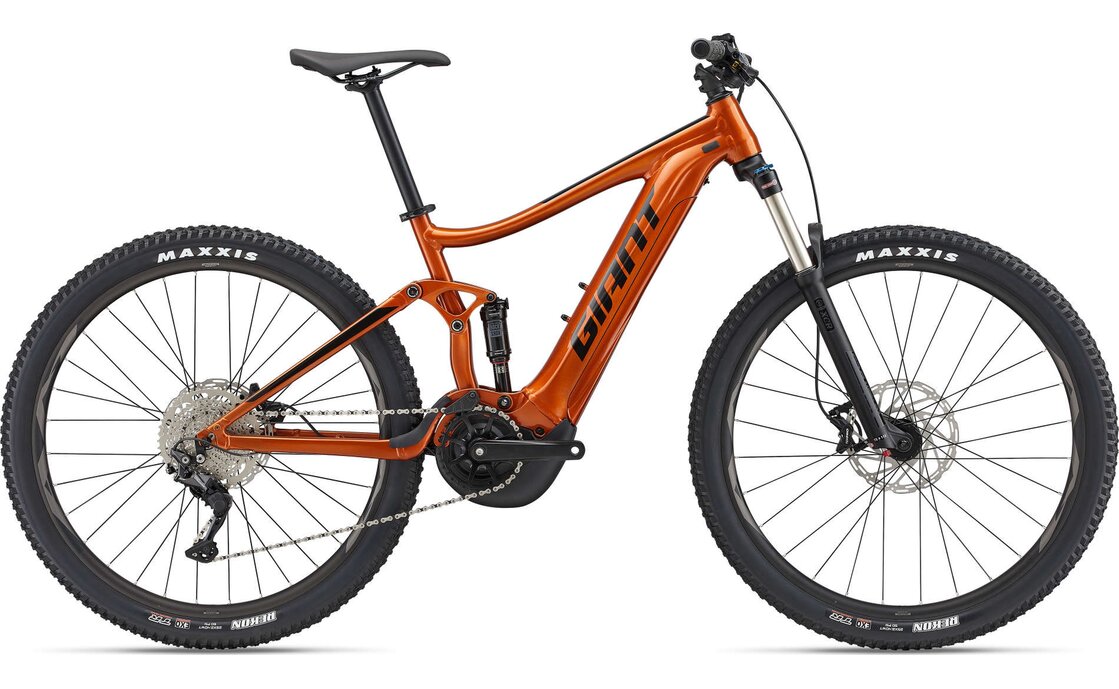 At its heart, the Giant Stance is and will always be a performance bike for high-performing riders who want to really let off steam on demanding trails.

With its 120 mm spring travel at the rear and – depending on the model – 120 to 130 mm at the fork, it also takes light jumps and particularly rough terrain with its left and leaves many more expensive models in the field of full-suspension bikes in the dust.

If you want to sweep unchecked down trails for which a hardtail like the Giant Fathom doesn’t have enough suspension, but at the same time you don’t need the off-road mobility that justifies the extra charge to the Giant Trance, then the Stance is the bike for your personal trail.

The Giant Stance shines with sophisticated, tried-and-tested technologies and offers the first foretaste of a demanding trail full suspension bike, especially for high-performing riders on the way to the enthusiast level.

Whether over roots, stones, sand, or mud: the 120 mm suspension travel ensures a smooth and perfectly cushioned ride, where you can get the most out of yourself.

At the same time, the high-quality aluminum of the frame and the sophisticated design with integrated overdrive and power core allow for reliable robustness and rigidity.

With high steering precision and good suspension on the fork and rear wheel, the Giant Stance is a performance fully for riders who want to give their full power – but not their full wallet.

Like most bikes, the Stance is available in different versions, which the manufacturer only distinguishes with the usual number designation.

The components and accessories of these bikes differ noticeably from one another, but all Giant Stance models have some elements in common that clearly define the unique riding experience even with different equipment:

Equipped like this, you can conquer every incline, every mud hole, and every rocky slope on the trail: The 27.5″ tires ensure optimal power transmission with a short lever travel so that even inclines can be approached with ease.

With the gears, the bottom bracket, and the brakes of the Japanese world market leader Shimano, you also benefit from a perfectly coordinated mechanism that ensures safe, fast braking in tricky situations as well as smooth shifting on the trail.

Our tip: The Giant Stance is the ideal starting point for riders who are changing from recreational athletes to true trail enthusiasts: It offers high performance and all the advantages of a fully MTB at a moderate price and gives you a perfect vantage point from which you can later relax you can look around for a professional model.

Outstanding performance thanks to the latest Giant technologies

All Stance models have four central, coordinated elements that give the bike its off-road mobility and reliability. Some of these were developed by Giant itself and are only installed in bikes from this manufacturer:

With bike frames made from this special alloy of 6061 aluminum, Giant is able to combine rigidity, robustness, and low weight in the frame material of your bike. The light metal is mainly produced with the help of press-forming techniques and can thus ensure high stability at a low cost.

The ALUXX aluminum frames of the Stance are single-butted – the individual tubes are thicker at their ends.

This supports the robustness and rigidity of the frame as a whole, while at the same time material and thus weight can be saved. As a result, the bike is characterized in particular by its ideal balance between weight and robustness.

The rear wheels of the Stance bikes are sprung using this proven technology. The suspension system rotates around a single pivot point and uses the movement created at the junction of the chain stays and the seat stays to cushion the rear wheel.

The damper is installed centrally above the bottom bracket and thus also contributes to the low center of gravity of the Giant Stance.

With its 120 mm of travel, the system is considered to be smooth-running and reliable on a wide variety of trails.

Compared to other modern suspension systems, it has a simple structure, which means that problems on the trail and damage after hard jumps are less common than with such a more complex system.

Of course, this also means that any repairs to the system can be cheaper – especially for drivers,

To increase steering precision, the headset bearing on the Giant Stance is designed to be particularly large (1/2″ below and 1/8″ above on mountain bikes). The conical steerer creates additional rigidity, which in turn has a positive effect on the steering precision.

With this technology, a particularly large bottom bracket integrated into the Giant Stance is combined with asymmetrical chainstays.

This means that the thickness and shape of the chain stays are adjusted to accommodate the different forces acting on the drive side and non-drive side.

The system increases the general rigidity of the frame and at the same time improves the power transmission at the bottom bracket.

Which size suits you?

The Giant Stance bikes are offered in four different sizes, each of which represents the perfect geometry for riders of different heights.

You should pay attention to this because the wrong size can result in an unergonomic fit and thus in less than optimal power transmission – and with a performance bike like the Giant Stance, this would prevent you from fully developing your abilities despite top-class equipment would.

The frame height and the proportions of the individual tubes on the Giant Stance are designed for 27.5-inch wheels. Changing the tire size later is not recommended, as this could change the entire frame geometry.